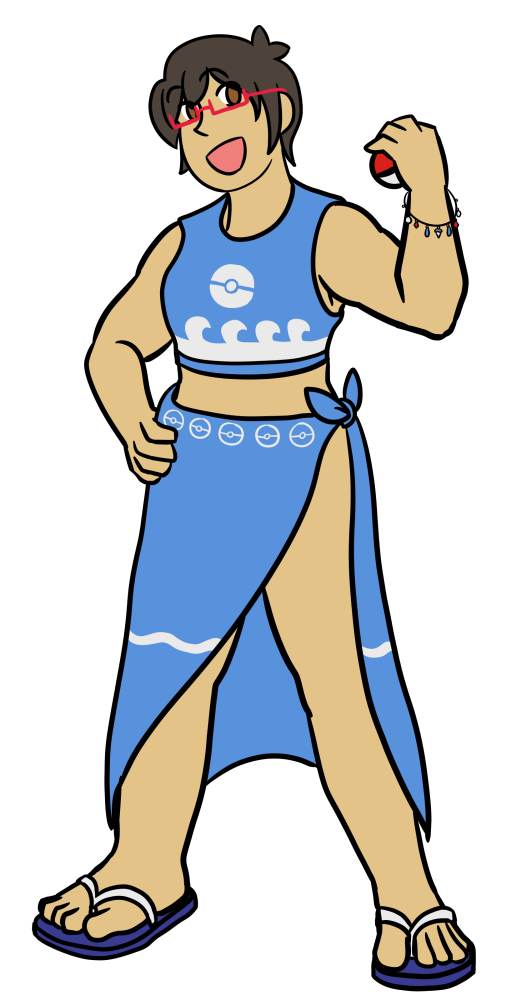 Casey was a quiet and independent child growing up, which led her to spending time alone fishing on Route 32 rather than hanging out with other kids her age. During one of her fishing trips, she met a Poliwag, and the two of them were inseparable ever since. Being with Poliwag helped her socialize with her peers, especially with the children who attened the local Pokemon Trainer School. She became friends with Forrest, one of the students at the school. When Forrest graduated, he invited Casey to travel alongside him as he took on Johto's Pokemon League Gym Challenge. Casey agreed and they travelled across Johto and beyond as Forrest competed in Pokemon League challenges around the world. As they journeyed across Hoenn, they made a stop in Slateport City, and Casey was taken in by the hustle and bustle of the city, especially the local open-air market. After a lot of thoughtful consideration, Casey parted ways with Forrest to persue a life as a merchant at the Slateport Market.

For the next few years, Casey ran her shop where she sold handmade accessories made of seashells. Although Casey usually used shells found locally on Route 109, she sometimes took trips to the Shoal Cave near Mossdeep City to gather materials for her merchandise. In her free time, she took bike rides to Mauville City and gambled at the Game Corner or shopped at the department store in Lilycove City. Because ships from many regions land in Slateport, Casey got to meet many people from many different regions including a mysterious blonde-haired wanderer...

One faithful day, she got transported to the Sinnoh region of the past, the then called Hisui region. She immediately gets recruited into Jubilife Village's Survey Corps. and is tasked to complete the region's Pokedex while uncovering the mysteries behind why she was brought there and her connection to the space-time rift looming in the sky. During her time in Hisui, she fell in love with Gingko Guild member Volo. On the night of the festival celebrating Casey's success in closing the space-time rift, she and Volo had a one-night stand. Despite Volo betraying her trust later on, Casey still had feelings for him and vowed to search the world for him once her duty with the Survey Corps. was complete. Before she could, however, she gave birth to a pair of twins and chose to stay in Jubilife to raise them.

Casey is a spirited young woman. She loves her Pokemon and dotes on them excessively. Although she gets along with people, she enjoys the company of Pokemon more.

[COMIC] There Are Two Types of People

[COMIC] What Do Combees Make?